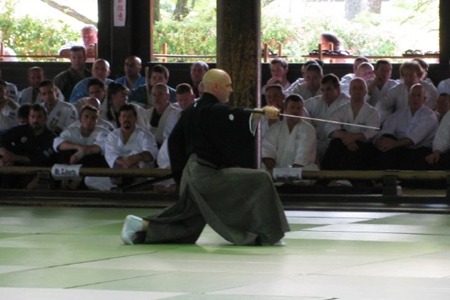 The Kokusai Nippon Budo Kai (KNBK) was founded by Shimabukuro, Masayuki Hidenobu, Hanshi, the 21st-generation Soshihan of the Masaoka line of Muso Jikiden Eishin-ryu Iai-Heiho and senior-most student of Miura, Takeyuki Hidefusa, Hanshi, the 20th Soshihan, in order to preserve and foster the growth of the classical and traditional martial arts he studied so deeply. Shimabukuro Hanshi believed deeply that the true purpose of budo is to actualize our inherent dignity, wisdom, and compassion, the highest ideals of the samurai, to improve one's character for the benefit of society and the sake of world peace. This is legacy that he has passed on to each member of the KNBK. The KNBK is now lead by Shimabukuro Hanshi's direct successor, Carl E. Long, Hanshi, 22nd Generation Soshihan of Seito Muso Jikiden Eishin-ryu Iai-Heiho and KNBK Kaicho. Through Long Hanshi's efforts, the legacy of Miura Hanshi and Shimabukuro Hanshi, the line of Muso Jikiden Eishin-ryu that Long Hanshi now leads, has been recognized and preserved in Japan, it's native soil, in perpetuity. Please visit the KNBK website  for further information about the traditions; history; and lineage of the KNBK and the arts that it houses, and a complete listing of world-wide authorized KNBK dojo.