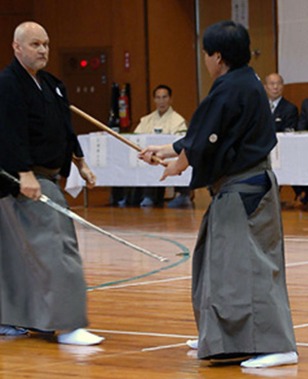 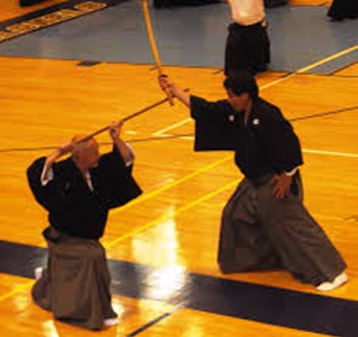 Shindokan Budo Dojo includes training in Shindo Muso-ryu Jojutsu, practicing under the authorization of the KNBK Hombu Dojo. Our regular practice of Shindo Muso-ryu also includes Shinto-ryu Kenjutsu, one of the sub-arts within this comprehensive sogo budo warrior tradition.

Shindo Muso-ryu  was founded circa 1605 by Muso Gonnosuke Katsuyoshi, following a pilgrimage he went on through the country (shugyo). This pilgrimage was meant to be lived as a drastic asceticism, as a consequence of his defeat against the famous Miyamoto Musashi. He had received initiation into the deepest of the Tenshin Shoden Katori Shinto-ryu tradition and practice (okugi). It was indeed because he had been defeated following a long series of victories in duels, that this warrior entered asceticism. His defeat lead him to the Kamado sanctuary, on Mount Homan, in the current Fukuoka state where, after remaining confined for 37 nights and days, he reached illumination (satori). He then was able to create the Jo techniques which allowed him to defeat Miyamoto Musashi during a new duel.

“maruki o motte suigetsu o shire” or “take a round stick, and find the solar plexus”

Gonnosuke became responsible for teaching the jojutsu for the Kuroda clan. This tradition was jealously kept secret within the clan as its official secret tradition (otome bujutsu) until the Meiji restoration (1868), when the interdiction to teach this technique outside the clan was waived.

In 1940, Shimizu Takaji sensei (the last soke) changed the name of the tradition from Shindo Muso-ryu jojutsu to Shindo Muso-ryu jodo, this latter reflecting better the change of the art, in full agreement with the new orientation of the modern society.

As a teacher of bujutsu to the Kuroda clan, Muso Gonnosuke Katsuyoshi issued teaching licenses to a dozen warriors. These samurai, or their successors, were also masters in other martial traditions which were progressively integrated into the overall curriculum of Shindo Muso-ryu. Even if these associated traditions kept their own technical specificities, they are taught as coherent parts of a unique curriculum. Today, the complete martial education of a member of Shindo Muso-ryu involves the training in the six following components of the tradition:

Isshin-ryu kusarigamajutsu (sickle with a chain)

Training in Shindo Muso-ryu within the KNBK can lead to opportunities to study all aspects of the tradition.

​According to Muso Shindo Ryu tradition, the dimensions of the jo came to Gonnosuke  through divine inspiration. The length of the Jo is designed to be just out of reach of a daito (long sword) and is characterized by direct strikes which utilize the sharp edge of the cut ends. Movement is frequently designed to control the sword by striking to the flat of the blade and controling the opponents hands with locks and other techniques. Distance is used in such a way that the sword’s effectiveness is mitigated.

Jojutsu is an exacting art, demanding precise technique in order to work against a sword properly. For this reason it is one of the the more difficult koryu traditions, requiring focused attention to detail, body awareness, and timing. Jojutsu is an aggressive but fine compliment to the understanding of other sword arts in general.